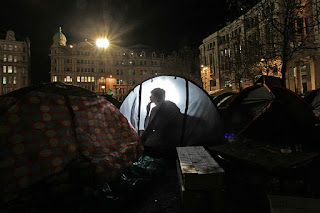 The photo series depicted the protesters staying in the tents during the movement of Occupy London in 2011. Occupy London is an ongoing peaceful protest and demonstration against economic inequality, social injustice and corporate greed in London started from 15 October. The movement began in solidarity with the Occupy Wall Street movement in New York, United States. Participants occupied and established two sites for camping in central London: outside St. Paul’s Cathedral and Finsbury Square.

Visually, tents and self-initiative protestors are the most iconic symbols of the Occupy Movement. By communicating with the activists living there and taking a picture for them, the photographic series follows the tradition of environmental portrait, which is now instead represented by silhouette in their tents, to illustrate the passion, persistence and loneliness of them. Shadows, or silhouettes, symbolizes that any reformation or revolution could be initiated by anyone at the age of Internet and civil society. Besides, some reports from the government claimed that only 10% of tents are occupied all night, and discredited the recognition of the whole movement. By documenting the participants in their little private living space, the project tries to retort on this statement, and allow the readers to see the bright and colorful side of the movement.